Our new home is often though of as a Craftsman. Given the architecture’s current popularity I thought I would take a moment to discuss how 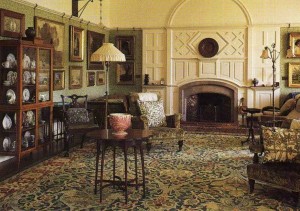 the Craftsman style came about. For any of you interested in an art history lesson, the American Craftsman style came out of a movement happening oversees in the late 19th century; the Arts and Crafts movement. Founded by the textile designer/writer/socialist William Morris in 1860, the movement rose from the ashes of Victorian ornate and embellished concepts. Morris felt that the industrial revolution was diminishing good design and craftsmanship as well as middle class jobs and that a return to the principles of clean, minimal, ethical and natural aesthetics was necessary.

The movement took hold in the US around 1900 when furniture maker Gustav Stickley published his magazine, “The Craftsman”. The magazine was in print for 15 years, and the style remained popular until the 1930’s. The American version of Craftsman style focused less on the social movement and more on fine quality design and construction.

While there is a certain understated aesthetic that goes along with it, what really distinguishes craftsman architecture are the thoughtful details and meticulous craftsmanship. For this reason I’m elated to own one and to have the privilege of restoring it to its former glory.